Midway through 2018, while scrolling through my Twitter timeline, I came across @MyTPI. Somewhere between #PitchingTwitter arguments and Rob Friedman (@PitchingNinja) posting a slow motion GIF of a big leaguer’s two-seamer, it stood out that a few individuals in the baseball world started visiting TPI for a certification.

The Titleist Performance Institute (TPI), “is the world’s leading educational organization dedicated to the study of how the human body functions in relation to the golf swing (www.mytpi.com).” I’ve come to understand that there are numerous carryovers to pitching and/or baseball from different sports and training modalities. As I began to dig a little, I wanted to figure out how I could come up with some money to pay for this certification course that TPI was offering.

Fortunately, I was in the right place at the right time and TPI announced that in 2019, it was releasing its Baseball and Softball equivalent training course, OnBase University! Incredibly intrigued, I was bought in literally and figuratively. Recognizing nearly every member of OnBaseU’s advisory staff made my decision even easier.

Everything that I had read about golf revealed that it was decades ahead of baseball in a sense of using technology and relating the body to performance. With that in mind, I signed up for the release of their Level 1 Pitching and Hitting Seminar in Phoenix, Arizona in February of 2019.

Arriving about 30 minutes early, I walked into the hotel conference room and was greeted by one of the staff members, Dr. Josh Satterlee. He asked my name so he could grab my name-tag and then asked if I was a coach or a fitness professional. I stumbled over my words and sounded like an idiot because my answer wasn’t A or B. My answer was something along the lines of “well, I am technically a Personal Trainer and do work for a hospital, but I did coach, and now I mostly instruct and help run a travel baseball organization.” It was not near as smooth as that sentence, much longer, and probably consisted of mumbling.

What I noticed within minutes of walking in to find a seat was the OnBaseU staff was clearly experienced at putting on a seminar. Staff members roamed the room to greet and strike up conversation with attendees. For anyone that’s been to a conference or seminar before, you know that this can make a huge difference, especially if you show up by yourself, early, not knowing anyone! This was one of the many things that impressed me about how well the seminar was run.

As the seminar started, there were introductions and then an overview of the 2 days to come. Dr. Greg Rose (Co-Founder of TPI and Founder of RacquetFit and OnBaseU) led off with philosophies.

If you’ve read any of the articles about OnBaseU, you will have heard about the race car analogy. The idea is that a baseball or softball coach is like the driver and needs to know what the dials represent on the dashboard. The dials would represent 4 things: mechanical, mental, physical and equipment. A coach (driver) needs to have a firm grasp of these, but it is the duty of the “pit crew” to know the specific type of fuel, how to fix the engine and many of the other finer details of how a car runs underneath the hood. In this example, the pit crew represents the training staff – strength coaches, therapists, athletic trainers, doctors, etc. The driver takes care of his end, while the pit crew takes care of their end. This is a “team approach” and a collaborative effort.

Another topic that is covered during the seminar is the “kinematic sequence.” From the Level 1 manual, it states about the kinematic sequence, that it is the most efficient way “players generate speed and transfer the speed or energy throughout their bodies.” 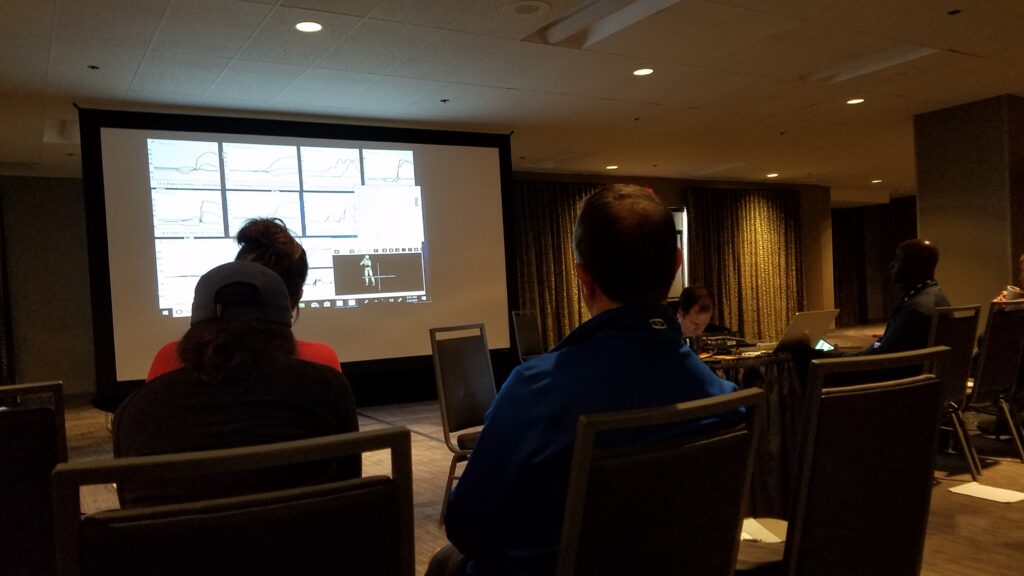 After talking philosophies and approach, we covered “The 13 Common Inhibitors to an Efficient Pitch.” The manual touches on “mechanical” concerns throughout the pitching motion and the physical components that can constrain the athlete.

The rest of the seminar was spent going over the OnBaseU screening process. A few screenings at a time are demonstrated with volunteers or with video footage from screenings the OnBaseU staff has already conducted. Once there’s a firm enough grasp, we broke into groups and started practicing on each other. This process was repeated for the entire screening. At the end, we would screen multiple people and fill it out on the screening sheet in our manual. 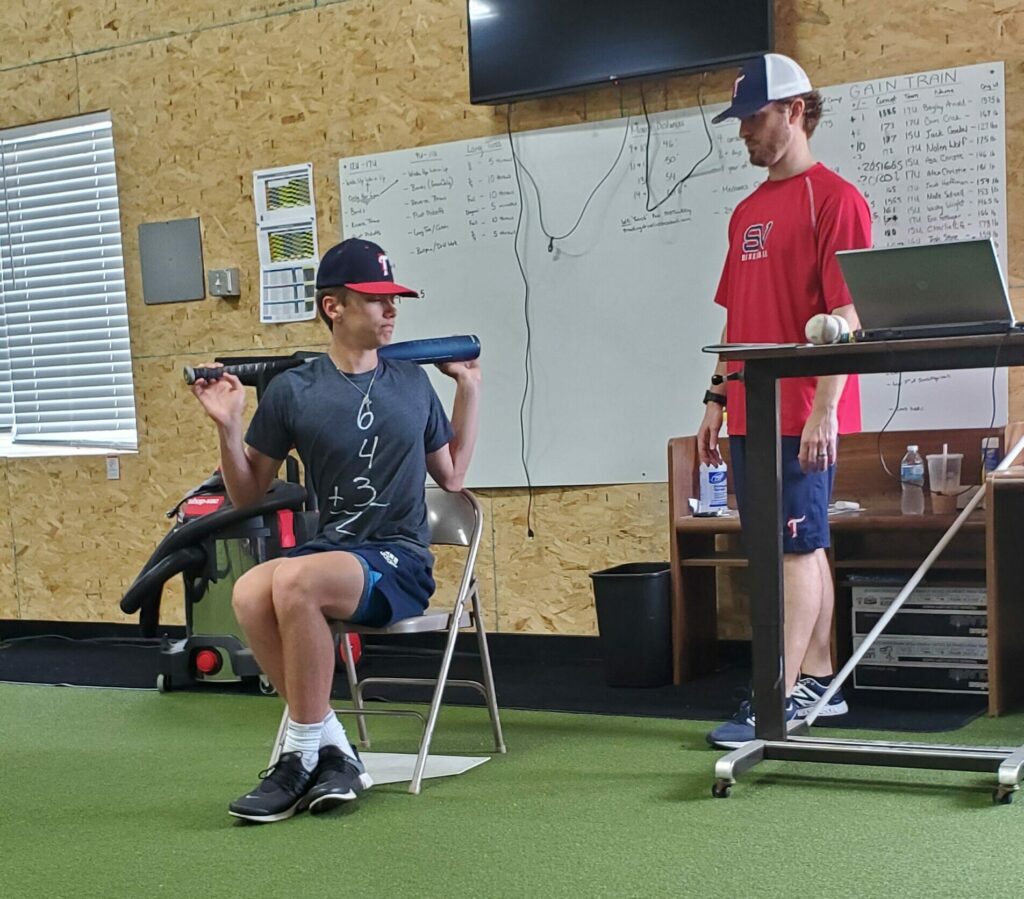 There were quite a few positive takeaways from my experience attending the inaugural Level 1 Pitching Seminar. The first was the “family” approach. The first conversation I had was with OnBaseU staff member Joe Yager and Steve Merriman, Pitching Coach with the Colorado Rockies organization. Within minutes, Steve and I realized we grew up in the same town! That was great in itself, but the more Steve and I talked with Joe, we realized that we were becoming a part of something pretty special.

Joe kept talking about how we are all a family now and that we’re in each others’ corner. He was exactly right. I felt that way the entire seminar from each one of their staff members. Whether it was Dr. Greg Rose talking in front of the room and then in small groups during breaks, or Joe and I having a side conversation, I never felt like anyone on their staff was “big timing” us.

Something else that I enjoyed was that Dr. Rose and the staff had a clear vision for the Level 1 Pitching Seminar. There were coaches, therapists, chiropractors, and other highly qualified professionals in the room with a lot of very detailed and specific questions. Participants got the sense early on that this is Level 1, not Level 5. They wanted the participants to have the Level 1 portion mastered, so any other questions that were 3 steps down the line were okay for side conversation, but were not as important for the entire group at that time.

If you look at the business model that MyTPI has setup, there are multiple levels in each area and they’ve strategically built them out so that you do not progress onto the next level until the first one is mastered. This is very smart from both an educational and business aspect.

One of the last things I’ll touch on is the ability to network at this event. Unlike some events that are very speaker-driven, the OnBaseU seminar is very hands on and interactive which forces you to interact with others. There is also ample time during breaks and lunches to say hello to your neighbors or even just listen in to good discussion.

You’ll see from the pictures of attendees that OnBaseU posts on social media, there aren’t 500 or 5,000 people attending so it doesn’t seem as overwhelming to interact with a few different people when you’ll be sitting next to them for a couple days as it is anyway. Networking was a huge perk of the seminar and the caliber of individuals in attendance is very elite! 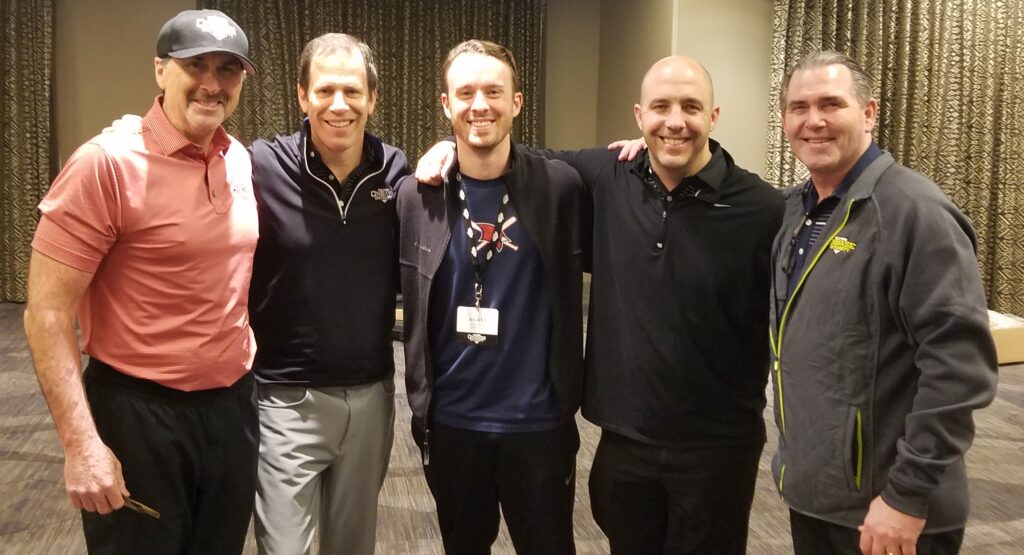 Here is what I would recommend based off of my experience and others that I have spoken to:

Show up early to find a good seat, say hello to someone on the staff and find out where one of your neighbors is coming in from. You never know who you might run into. The perfect example was running into Brian Bradley who not only works with the likes of the NFL and Tony Robbins, but also is the Vice President of Egoscue and was able to give me some tips on my back pain!

Reach out to someone on social media or from the OnBaseU website search tool that has already attended so you can get another perspective and also grow your network. Use that conversation to drum up some questions when you attend.

Strike up conversation with those that you screen in the interactive portion. I screened Mindi Boysen and in our conversations I learned that she had lived in Indianapolis at one point, so we talked about that and she has since been a great resource for me with her experience in the field of youth and long-term athletic development.

Sign up and go because as long as you attend and pass the final test, you’ll be able to attend the Level 1 course as many times as you want! For the low cost of a yearly certification renewal fee, you can continue coming back to future events for the same course. This is a huge perk and many of the TPI Certified attendees highly recommended doing it!

My experience with OnBaseU was fantastic and I would highly encourage anyone that works with a softball or baseball athlete to attend. To register for the most recent seminar and find out more information, visit: http://www.onbaseu.com/certification/seminar-calendar

Scott Haase is the Pitching Coordinator for the Indiana Twins Travel Baseball Organization. In charge of over 180 athletes, Scott develops off-season programming for the entire organization. A former college pitcher with 7 years of coaching under his belt, Scott holds certifications from Driveline Baseball, OnBaseU, Baseball Think Tank, and is a Certified Personal Trainer. You can follow him on social media @ScottHaase14.